Tradition is not the worship of ashes but the preservation of fire – Dr. Bürklin-Wolf

Those who don’t know Bürklin-Wolf know nothing about German wine, and those unfamiliar with German wine should start catching up with it. Founded in 1597 and still family-owned, Dr. Bürklin-Wolf is an institution, an icon and a bastion of German wine culture. But today this bastion is only intimidating from the outside, with gothic, stone tower portholes, but on the inside there’s a carbon-neutral loft with Scandinavian minimalist design. Gustav Mahler, the genius innovator of symphonic music, once said: “Tradition is not the worship of ashes but the preservation of fire.” This could also be the motto of Bettina Bürklin-von Guradze, who has been running the estate since 1990.

If there’s an area with hills, on which grapes grow, somebody will compare it to Tuscany, sooner or later. Pfalz is no exception, either – when reading about the wine region, you come across the tourist-luring slogan all the time, calling Pfalz the German Tuscany. One of the excuses for that could be that the parallel is also well established in terms of weather, as it is the warmest and driest of the famous Riesling-growing regions. Even though many people have said that there is no bigger winner in global warming in the world of wine than Germany, winemakers in Pfalz increasingly feel that they might have benefited too much from it. It’s not only the surging sugar levels of the must at the end of hot summers, and setting and carrying out the harvest with surgical precision that cause headaches, but also the lack of water.

The transition to biodynamic cultivation began at Bürklin-Wolf in 1995, and it seems as if they had anticipated the challenges of the next century. The experience biodynamic practitioners often state is that the grapes cultivated in this way are more vigorous, bear the various stresses – heat and drought – better and reach full ripeness at lower levels of sugar. Bettina Bürklin was laughed at in 1995, but today she’s being copied.

More important than the superficial Tuscany parallel is that Pfalz is the northern continuation of Alsace, and in the same way as it happens there, German culture encounters, collides and mixes with French here as well. It’s possible that Bettina Bürklin was not motivated by this deeply-rooted cultural duality, but by personal imagination and courage regarding the most important decisions in the estate’s life, yet the French inspiration is not only obvious but also openly admitted.

Bettina Bürklin originally studied to become a banker, and even though she later obtained a degree in oenology from Geisenheim University, her father insisted that she could not take over manging the estate before she turned 30. When in 1990, she took over the estate from her mother, who was widowed very young, she completely reorganised the operation of the large estate. She scaled down the size of the vineyards by a third, and shifted the emphasis from quantity to quality, from sweet to dry wines, and that wasn’t even her bravest move.

Her first truly original step was to break with the 1971 German Wine Law, which simply identified quality according to the sugar level, i.e. ripeness. Bettina Bürklin, who speaks excellent French, adopted the Burgundian system – she dug up the ancient vineyard classification with thorough research and created a four-fold hierarchy: estate wine, village wine, premier cru wine and grand cru wine. This move was a scandal in the eyes of the German wine world back then, yet, hardly two decades later the prestigious elite club, the VDP (Verband Deutscher Prädikatsweingüter), practically took up the classification without any changes (Gutsweine, Ortsweine, Erste Lage, Grosse Lage).

According to many commentators, Pfalz is the world’s number one region for Riesling. Furthermore, Dr Bürklin-Wolf is the National Gallery. A portfolio presentation at theirs is like being at the Albertina Museum in Vienna – our eyes dazzle as we enter a room where Dürer paintings, etchings and engravings hang on all four walls, then we walk through to the next room and see Dürer from wall to wall again, then in the next one as well, and so on. For us, it may just sound like a series of unpronounceable names, but for a die-hard Riesling fan, they are a ‘Best of…’ compilation: Kirchenstück, Jesuitengarten, Ungeheuer, Pechstein, Reiterpfad, Gaisböhl, Gerümpel, Goldbächel and Rechbächel. At Bürklin-Wolf, they are aware of the responsibilities that come with their situation and are doing everything they can to pass this national heritage onto the next generation in the best possible condition. 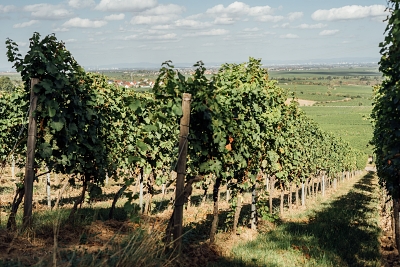 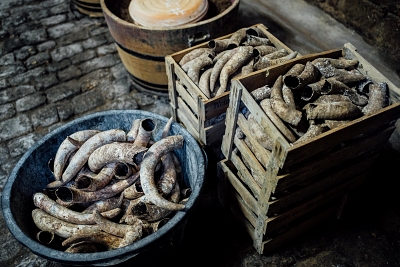 To get the grapes into the best shape

The second revolutionary innovation was the introduction of biodynamic growing, about which Bettina Bürklin said in an interview:

For some time, we’d been cultivating the vines in an almost fully organic way, placing pheromones in the vineyard and participating in the ‘environmentally- friendly, integrated viticulture’ program. We came across biodynamics by accident. We discovered the first book by Nicolas Joly, an anthroposophic winemaker from the Loire, on the shelf of our friends’ place in New York. This gave us the starting push. We first tested it in 2001 on eight hectares. The experiment was so successful that in 2005 we changed the entire cultivation over to it. Biodynamics is about strengthening the plant, not about poisoning something.

I often ask myself why it’s not done by everyone. Our ancestors also composted and fertilized this way, only they did not call it ‘biodynamic cultivation’. It requires a lot of effort, you have to pay a lot of attention to the plants, constantly keeping an eye on what condition they’re in. The nice thing about it is that you get much closer to nature.

In 2005, Bürklin-Wolf was the first estate in Germany to be granted biodynamic classification by the Biodyvin organization. Without the ceremonial elements, biodynamics means a radically close-to-nature cultivation method. It constitutes a turn against large-scale, quantity-focussed and risk-free growing, and a return to small-scale farming. Instead of chemical carpet bombing, it uses tools of local natural medicine. While large-scale farming attempts to take the place of growth away from the realm of nature, biodynamic cultivation puts its back in nature’s dominion, while in the meantime it does everything it can to promote the prosperity of the plant. It does this not completely selflessly. The aim is to get the grapes into top form, because that’s the only way top wines can be made. As legendary German winemaker Helmut Dönnhoff said:

When we cut the bunch from the vine, that’s when we keep the maximum quality in our hands. The great art in winemaking is to lose as little of the quality of the raw material as possible on the road from fruit to wine.

In the same spirit, winemaking at Bürklin-Wolf is based on the principle of low intervention. The Premier and Grand Cru Rieslings come from 15 different vineyards, and they are fermented in large, old oak barrels without added yeast. The size of the barrels ranges from 600 to 3,000 litres. After the natural fermentation, the wines remain on the lees for some time, depending on the vineyard and state of development. The vineyard-selected wines typically spend six months to a year in barrels, while the Grand Cru wines are put on the market in the spring of the second year following the harvest. The two entry-level wines – the dry estate wine and the semi-sweet Hommage à Luise Riesling – are fermented in a mix of stainless steel and old oak barrels.

As in the case of the best wineries, the entry-level Riesling at Bürklin-Wolf offers a complete experience: it’s explosively fruity, sparklingly lively and wonderfully mineral. According to David Schildknecht, perhaps the most highly regarded critic of German wines today, the dry estate Riesling is "often the best wine of its kind in Germany, from vintage to vintage". Moreover, the Grand Cru and the Premier Cru wines are reference points of the variety, the landscape and the wine culture.